Michael KochPosted on 1. Oktober 2016 No Comments 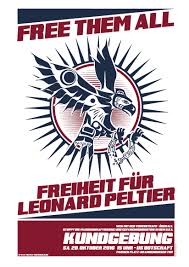 please spread: FREE LEONARD PELTIER – FREE THEM ALL! „I am Barack Obama’s political prisoner“ Demonstration on Saturday, the 29th of October 2016, beginning is 3 pm at the Pariser Platz, Berlin in front of the US-Embassy Over 500 years after the brutal conquering of Inca and Aztec territories, 125 years after the last military massacre on Native Americans in the USA, and over 40 years after the violent oppression of a revolutionary movement in the USA by the so called Counter-Intelligence-Program (COINTELPRO), the worlds longest history of genocide and colonialism cannot be considered having ended. Murder, forced displacement, judicial persecution, insufficient medical treatment, habitat destruction, constrained poverty, and assimilation are only some measures that are constantly used against indigenous people. The prisoner Leonard Peltier and former activist of the American Indian Movement (AIM) is one of the victims of this continuous repressive structure. His prison sentence, which has already lasted more than 40 years, is representative for the imprisoned Native Americans that dared to fight aside AIM similar to the Black Panther Party against racial and deadly police violence. The allegation against Peltier of being responsible for the murder of an FBI officer in 1975 has never been proven. Today he is a sick man. Being locked up for many years in high security prisons has ruined his health. Since there was no evidence nor were there any witnesses to prove his guilt, Ramsey Clark, a former Attorney General, in 1993 appealed for clemency to the US president, who is theoretically entitled to grant it. Leonard Peltier is only one of the 2.3 million prisoners in the USA. Like the Black Live Matters movement outside of the prisons, it is the people of color in the prisons that face political repression and social exclusion and have to fight back. The US-prison industry generates billions of US-dollars of profit by exploiting prisoners. Thus in 2016 numerous prison strikes and actions to abolish internal slavery have been rising. Eight years ago the election of Barack Obama as president evoked some hope that the racist social order could be changed to some extent. After his two terms the communities of color are even more excluded than before. This president did not even sign the appeal of clemency for Leonard Peltier. It seems that only strong political pressure will force him to grant the reparation demands of the indigenous – To free Leonard Peltier! Governmental political repression and the desire for revenge against rebellious activists is clearly not confined to the United States. The Berlin case of continuing custody of Aaron and Balu is a current example in Germany. We demand their release! Leonard Peltier and all of the fighting prisoners rely on your support from outside the prisons. Let us together apply some pressure on the 29th of October in front of the US Embassy! Indian Wars Are Still Not Over – The Struggle for Freedom Goes On! Free Leonard Peltier, Free Mumia – FREE THEM ALL! — FREE MUMIA – Free Them All! www.mumia-hoerbuch.de _______________________________________________ free-mumia mailing list free-mumia@lists.nadir.org https://lists.nadir.org/mailman/listinfo/free-mumia